What is Lavani Patta Land? 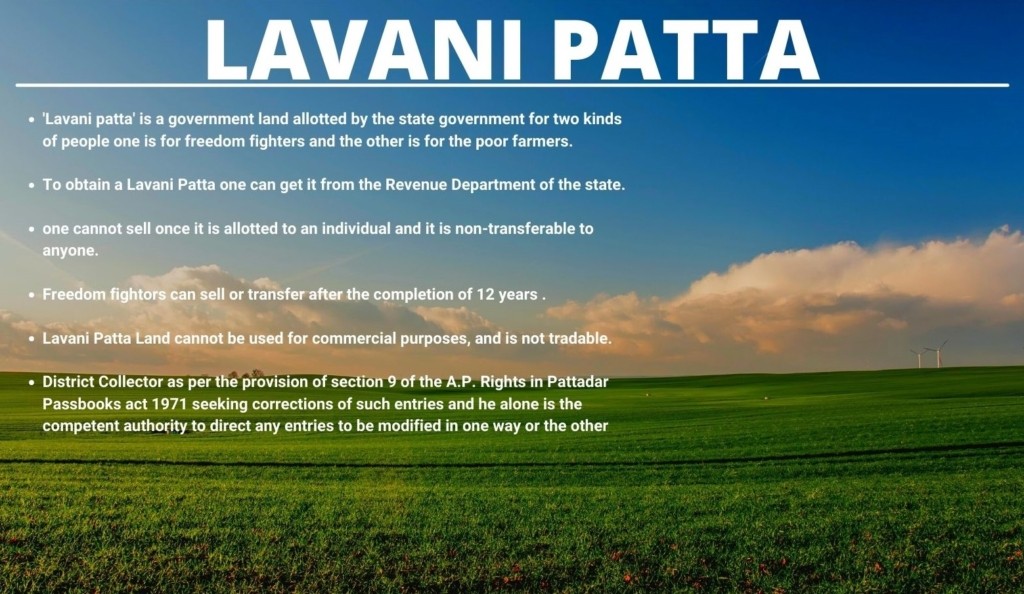 In Telangana, there are different types of lands titles that provide land ownership. Here Lands are segregated into Private land and Government Assigned Land, and the land owned by an individual who has Record Of Rights ROR on his name, and has legal land title ownership.

Whereas government-assigned land is allotted to any individual who belongs to a BPL Below Poverty Level family to elevate their economic standards is termed as Government Assigned Land. Here it has ownership land title on an individual’s name, but assigned lands cannot be sold or transferred to anyone.

To obtain a Lavani Patta one can get it from the Revenue Department of the state. The Chief Commissioner of Land Administration (CCLA) is the chief controlling authority for the revenue administration. Usually, the Tahsildar is the competent authority to assign the lands. Here, 50 percent land is assigned to Schedule Castes, 10 percent to Schedule Tribe, 30 percent to the backward classes, and the rest 10 percent is provided to other categories.

Once every year, a 100 percent field inspection needs to be done and the revenue department has the authority to cancel the assignment and resume the land to the government in case of any issues. The government usually keeps monitoring, tracking such type of land as it is their assets. To get such type of land, one has to contact the village officer, who will then place the request in front of the Revenue Department Officer (RDO).

The term ‘patta’ is a legal document that is issued by the government. Lavani patta is a government land allotted by the state government for two kinds of people one is for freedom fighters and the other is for the poor farmers. To get the allotment of Lavani Patta there are certain criteria as per the laws made by the concerned state government which is mentioned below.

The concerned state government has made strict laws to curb the misuse, sale of Assigned/ Lavani patta lands. Hence one cannot sell once it is allotted to an individual and it is non-transferable to anyone. In our daily life, we come across some cases of selling Lavani Patta Land. The buyers purchase the land unknowingly and face the legal consequences later.

Nowadays the state government acquires the assigned lands from the farmers for developing irrigation projects or other Industrial projects under the Land Acquisition Act 2013. Here the government has the statutory rights to acquire the private lands and Assigned lands. The Land Acquisition Act 2013 has the provision of acquiring the assigned, private land. Compensation is also given under the rehabilitation and resettlement act 2013.

In the case of freedom fighters, the allotted patta land is given with preconditions to them for not selling before 12 years. It can be sold or transferred after the completion of 12 years from the date of allotment tenure.

Lavani Patta Land is the only one of its kind, cannot be used for commercial purposes, and is not tradable. If it is sold by anyone it cannot be registered anywhere in the state which is a punishable offense for the seller and attracts legal action.

Can we convert the Lavani Patta to Private Patta land?

In some cases, the private patta land is illegally put in the revenue records as Lavani Patta by an act of human error, or if someone not claiming the land as private land, in that case, there is the possibility to get it rectified by the competent revenue authorities who are not less than a District Collector.

On the other hand, the Honourable courts observed and commented that, Assistant Government Pleader for revenue submits that the Tahsildar is not vested with any powers concerning, making any corrections concerning the wrong entries made in the revenue records. Even assuming that if there are any inadvertent mistakes the petitioner needs to approach District Collector as per the provision of section 9 of the A.P. Rights in Pattadar Passbooks act 1971 seeking corrections of such entries and he alone is the competent authority to direct any entries to be modified in one way or the other. Any corrections relating to the entries could be made in any circumstances satisfying section 3(3) of the act within one year.

Telangana: No Farmland is allowed for registration if the area of the farm plot is less than half-acre (20 Guntas)

What is RTI Act 2005? How to write an RTI to Public Information Officer for access to the information?

Safety of the building and residents plays a crucial aspect of a high rise building in these days,...
Continue reading
by easy2buyproperties

Is It Good To Buy High-rise Apartment?

Vertical expansion in the form of multi-storeyed apartment complexes seemed to be the only...
Continue reading
by easy2buyproperties

What is RERA Carpet Area According To RERA Act.

RERA carpet area refers to anything inside the outer walls of an apartment, but excluding the...
Continue reading
by easy2buyproperties